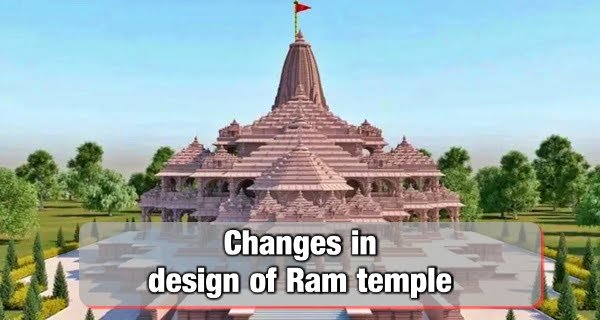 Ayodhya: The grand temple of Ram has become a topic of discussion in the whole country these days, its restoration work is also going on very loudly. In this episode, in the recent meeting held in Delhi, some important decisions have been taken regarding the design work of temple construction. In the meeting held on November 14, there was churning about the raft being built after the foundation of the temple. But despite the use of ice water and ice in the foundry, cracks started appearing in the sealing of the raft, after which the working organization Larsen & Toubro stopped the work and used another technique. Now 30 blocks of rafts will be made, their width will be 9 meters and cold water will be used to maintain the temperature as well.

The pace of work is slow, will now be completed in December
The renovation work is getting delayed due to design changes. It is being told that due to the slow pace of work, the rafting work was to be completed by November 15. Now it will be completed in the month of December, after which the work of construction of the plinth will be started. There is a Sita well in the Ram Janmabhoomi complex, whose water has religious beliefs and on the basis of those beliefs, people of Sanatan Dharma in Ayodhya and around Ayodhya use the water of Sita well in worship. After the demolition of Babri in 1992, the existence of the Sita well was in danger, after which now Shri Ram Janmabhoomi Teerth Kshetra is beautifying this mythical well as well. Sita well is being constructed from where people will be able to get water for religious rituals.

Trust sensitive about the age of the temple
The Ram Mandir Trust has talked about the construction of the temple by 2023 December, they claim that in 2023, Ramlala will sit in the grand temple and see the temple construction speed was going on fast, but the trust is sensitive about the age of the temple. All scientific techniques have been used in the construction of the temple in order that this temple remains safe for 1000 years. However, if sources are to be believed, 16 idols will be engraved on every room in the grand temple of Lord Rama. Out of the 17 mines of the raft being built on the foundation of the Ram temple, 12 mines have been constructed. Now the shape of the remaining surface of the mines being built has been changed. This decision has been taken due to not getting the temperature of 23 degrees Celsius after mixing the spices used in making the raft. It is being told that the outside temperature has become favorable, but the block made in 27 meters has been reduced to 9 meters after the problem in the casting of spices to accommodate the high temperature during the manufacture of spices.

Conservation of Sita Coupe
Champat Rai, general secretary of Ram Janmabhoomi Teerth Kshetra, said that there is a mythological well in the Ram Janmabhoomi complex. The people of Ayodhya use its water in religious rituals, the ancient Sitakup is being protected. Trust’s general secretary Champat Rai said that the construction of the plinth has not started yet, it is possible that the work of construction of the plinth may start from December. The area was not increased for nation-building, the bigger piece was molded in 1 day, it will now be less molded, earlier 27 meters wide block was molded. Now it has been reduced to 9 meters, now instead of 17 blocks, 30 blocks will be made in the raft.

13/03/2021/12:25:pm
New Delhi: The agitation of farmers against the three new farm laws of the central government has been going on for the last about...

11/09/2020/8:51:pm
Mumbai: The Mumbai Police will soon start an investigation into the drugs case against Kangna Ranaut. According to sources, the Maharashtra Police has sent...

Fire in coal mine in Siberia, Russia, 11 killed, more than 40 injured

Pakistanis will not be able to visit China, due to Corona, imposed ban

15/01/2021/10:15:pm
Beijing: Pakistan has been considered as a close friend of China for a long time. Whenever Pakistan gets caught in an economic crisis, the...