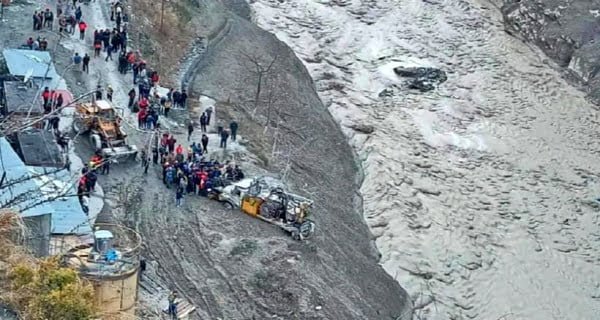 This tunnel of 180 meters was cleaned up to 145 meters. There are problems in operation due to continuous slug of debris and backflow. Pumps have been installed to drain the water from the tunnel. First water drainage is being done and then debris removal work is being done in the tunnel. Here, the employees of Hindustan Construction Company, who are doing excavation work in NDRF and Tunnel, are facing a lot of problems. On the other hand, work has also been started to remove the slugs filled in the desalting chamber adjacent to the tunnel. More than 100 people are feared buried in the desilting chamber, but debris is lying here for fifteen to twenty meters. The JCB machine cannot be put here until the debris dries up.

Teams of NDRF and SDRF are also running search operations along the banks of Dhauliganga. There is a possibility of dead bodies coming here. On the other hand, the state government is also constantly monitoring the lake in the area adjacent to Peng village on the top of Dhauliganga. Director GSI, two geologists from Wadia Institute, a scientist and two SDRF personnel were sent to the spot here on Friday through Air Force Chaupar. This team will inspect the lake on Saturday as well as study it.

22/06/2020
New York: The statue of Theodore Roosevelt outside the American Museum of Natural History in New York City will be removed amid protests against...

30/12/2020
New Delhi: 14 more Coronavirus New Strain cases have been found in India. With this, the number of people infected with this new strain...

19/06/2020
World Health Organisation's chief scientist, Dr Soumya Swaminathan has said that the agency is optimistic and hopeful that the COVID-19 vaccines could be available...

23/12/2020
Jerusalem: Israel seems to be moving towards the fourth general election in two years. The last attempt to uphold the government and prevent Parliament...

30/06/2020
New Delhi: Prime Minister Narendra Modi addressed the nation and announced that the scheme of free ration for the poor is extended until November....