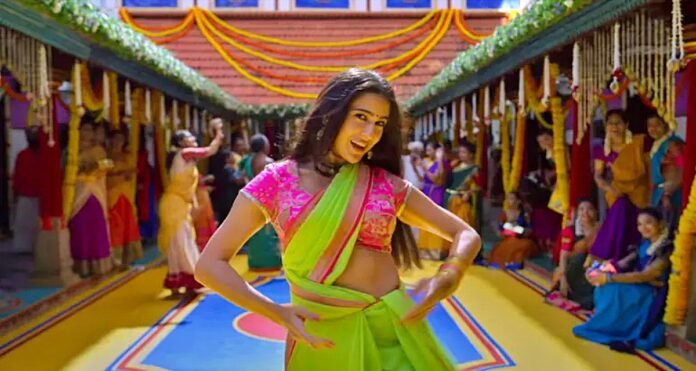 Mumbai: The first song ‘Chaka Chak’ from Bollywood actors Akshay Kumar, Dhanush, and Sara Ali Khan’s upcoming film ‘Atrangi Re’ has been released. Sara Ali Khan and Dhanush have been filmed in this song. Sara is seen doing a tremendous dance in the song.

Talking about the song, in the song, Sara tells Dhanush that she will be the first wife of the country who is very happy in her husband’s engagement. After which Sara dances in a green sari. Sara Ali Khan is looking very beautiful in a saree. In the same song, Dhanush has also become a fan of Sara Ali Khan’s dance. It is worth noting that Shreya Ghoshal has given her voice to this song. Irshad Kamil has written this song. This song has been released on the official YouTube channel of T-Series.

It is worth noting that recently the trailer of the film was released. In the trailer, Sara is seen playing the character of ‘Rinku’, a Bihari girl. On the other hand, the bow of Tamil boy Vishu. Appeared in the character of Vishu. It was seen in the trailer that how both of them are forcibly caught and got married. After marriage, it is revealed that Rinku is in love with Shahzad i.e. Akshay Kumar.

16/07/2020/9:50:am
Washington: With less than 16 weeks left in the presidential election to be held in November, US President Donald Trump announced Wednesday the name...

01/09/2021/9:28:pm
Technology company Xiaomi has launched a new product in China, which is named Mijia Sweeping and Mopping Robot 2 Pro. The company has launched...

Jaish-e-Mohammed and Lashkar-e-Taiba changed their names, attempt to save Pakistan from the whip of...

12/10/2021/9:20:pm
Islamabad: Pakistan-based terrorist organizations Jaish-e-Mohammed and Lashkar-e-Taiba have now changed their names to terrorists to avoid action by other international level organizations including FATF....