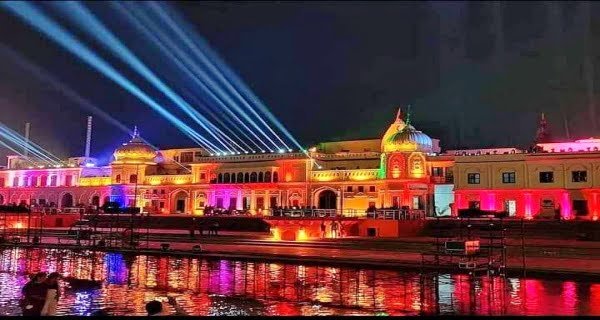 Lucknow: Complete preparations have been made for the main festival of Deepotsav 2021 in Ayodhya, UP. Along with this, a new record is also going to be made in Ayodhya today. The BJP government of the state wants to make it very special by organizing Deepotsav. Deepotsav has become a world-class identity. Every year a world record is being set for lighting diyas.

It may be known that a new world record is going to be made in Ayodhya by lighting seven and a half lakh lamps simultaneously in 40 minutes and for five minutes. By the way, Deepotsav which started in the year 2017 has created new records every year. The Guinness Book team is a witness to the records being made every year. This time also the team has again reached Ayodhya in view of this.

The program of Deepotsav is happening today at 2.30 pm with the arrival of Lord Shri Ram Sita by helicopter. In view of this, Uttar Pradesh Governor Anandi Ben Patel, CM Yogi Adityanath, and many ministers and saints are going to welcome the Lord by decorating the lamp. Whereas last year the state government had lit more than six lakh diyas on ‘Deepotsav’. There is also a 3D holographic and laser show and fireworks show. The CM of the state will also perform CM Saryu Aarti during this time.

iPhone 13 Mini is the cheapest iPhone of the new series, highlights from Apple’s...

15/07/2020/11:44:pm
Mandla (MP): The family ground dispute took violent form on Wednesday afternoon in Maneri, an industrial area on the border of Mandla district, and...

Donald Trump can start his own site in preparation for a comeback on social...

22/03/2021/9:13:am
New York: Former US President Donald Trump is preparing to return to social media. The special thing is that this time he is about...