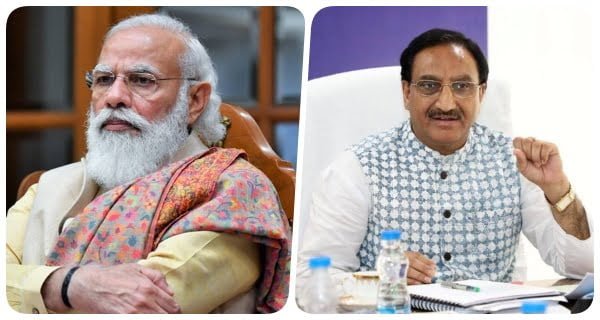 New Delhi: On 14 April 2021, PM Modi and the Union Education Minister held an important meeting, in which CBSE officials were also present, to demand the cancellation of the CBSE board examination due to Corona cases in the country. In the meeting, it was decided to cancel the 10th board examination and postpone the 12th examination.

Students will pass this way in the 10th exam
The Education Minister tweeted that the 10th board exams to be held from May 4, 2021, to June 14, 2021, have been canceled. The results of class 10 will be prepared by the board. The 10th result will be prepared on the basis of objective criterion (internal assessment). If a student is not satisfied with his result, he will be given a chance to sit in the examination in a favorable position to take the exam. Explain that 18 lakh students would have appeared in the 10th examination and 12 lakh students in the 12th examination.

He demanded to cancel the exam
After Delhi CM Arvind Kejriwal, Congress leader Priyanka Gandhi, now Rahul Gandhi has also expressed concern about the CBSE board examinations. Apart from this, MNS chief in Maharashtra, PMK founder S Ramadoss in Tamil Nadu, Bollywood actor Sonu Sood and Raveena Tandon have also demanded cancellation of board exams and promotion of students in the next classes without exams. Raveena Tandon said via Twitter that this time is stressful and it may be risky for children to take the exam at this time.

Now being fully vaccinated is not enough, people got Omicron even after two doses

27/01/2022/10:34:pm
Washington: Coronavirus continues to wreak havoc in most countries around the world including America, India. The US Health Agency Centers for Disease Control and...

05/07/2022/9:26:pm
A father-daughter duo has created history in the history of the Indian Air Force. Air Commodore Sanjay and his daughter Flying Officer Ananya have...

CBSE has taken these steps for class 11th, Arts, Commerce, and...