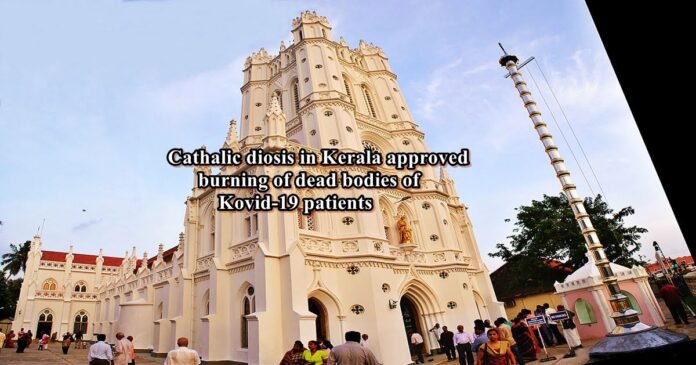 Kochi: The bodies are buried under the rules of the Roman Catholic Church, but the archdiocese in Kerala has approved the burial of corona virus-infected patients in places where burial sites are complained of due to lack of space Have been. The archdiocese of Syro-Malabar, which falls under the Vatican, stated in its circular that the current situation has been considered and accordingly the dead bodies of Kovid-19 can be burnt under the supervision of city authorities after the approval of relatives. The circular has been issued on 13 June stating that after the cremation of the dead bodies, the remains will be deposited and buried in the cemetery.

Sources said that for the first time in the history of the Syro-Malabar Church in Kerala, the bodies are being burnt. The decision was taken after Archdiocese Public Relations Officer Father Naysan Allanthanathu said that many of the cemeteries under Archdiocese are lacking land and burying the bodies of corona virus-infected patients is becoming a social issue.

The law accepted by the Church (Canon Law) has the option of choosing to burn the Catholics instead of being buried under stricter conditions. They said the burial of bodies is associated with the Church and that religion has a major role in it. Because revival occurs under the Christian faith and it is necessary to have a body. He said that in the present situation the church accepts burnt bodies as an alternative but the remains are to be scattered.

At the same time, there is a ban on keeping the remains in the house as well. This decision of archdiocese has come after a controversy over the burial of a corona virus patient. In fact, church officials near Chalakudy protested against the burial of the body in the cemetery. He claimed that this cemetery is on marshland and under the rule of Kovid-19, digging deep for burial here would not be appropriate. The body was later buried after intervention by Thrissur district administration.

Petrol most expensive in MP then cheapest in Andhra, prices increased for the second...

Good news for WhatsApp users! Can easily transfer chats from iPhone to Android

04/09/2021/9:10:pm
Now if users transfer their operating system from iOS to Android or from Android to iOS, then they had to lose their old chat...

21/04/2022/8:49:pm
Kabul: Afghanistan is once again shaken by the blasts. Serial blasts took place here on Thursday at three different places, in which at least...

01/05/2021/8:32:pm
Jabalpur: A lorry parked unclaimed for nearly 12 hours along the road near the Kareli Bus Stand in Narsinghpur district in Madhya Pradesh containing...

Palm oil and gold and silver will be expensive, steps of...