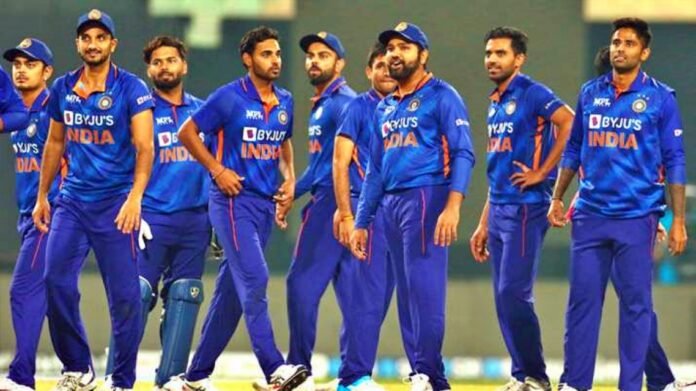 Kolkata: India thrashed West Indies by 17 runs in the third and final T20 International here on Sunday to clinch the series 3-0 with Suryakumar Yadav’s quick half-century and brilliant performances by the bowlers. With this, the Indian team reached the top of the T20 ICC rankings. After being invited to bat, India scored 184 for five with the help of a 37-ball 91 for the fourth wicket with Suryakumar Yadav’s 65 and Venkatesh Iyer (35 not out).

West Indies team could only manage 167 for nine in 20 overs despite Nicolas Pooran’s half-century innings of 61 runs in response to this target. Among Indian bowlers, Deepak Chahar bowled only 11 balls in which he took two wickets, but after that, he got injured. Harshal Patel took three for 22 while Shardul Thakur took two wickets for 33 runs. Venkatesh Iyer impressed everyone with his all-around performance, first supporting Suryakumar with the bat and then picking up two wickets for 23 runs in 2.1 overs.

Suryakumar was at his best in T20 Internationals, hitting seven sixes and a four in his 31-ball knock. He got out on the last ball of the innings. Venkatesh Iyer played him well with his unbeaten 35 off 19 balls with four fours and two sixes. India added 86 runs in the last five overs. Suryakumar Yadav found good support from pace bowling all-rounder Venkatesh Iyer to help the Indian team recover which had lost four wickets for 93 runs.

Shreyas Iyer (25) and Ishan Kishan (34) shared a 50-run stand in just 32 balls but both could not convert the good starts into big innings and were dismissed within seven balls. The West Indies spin duo of Hayden Walsh (1 for 30) and Roston Chase (1 for 23) bowled brilliantly in the middle overs. Leg-spinner Walsh got Shreyas Iyer caught at long-off while Chase took Ishan’s wicket in the next over.

The Indian batting order got a new look with Ishan Kishan opening the innings with Ruturaj Gaikwad while Shreyas Iyer came out to bat at number three and captain Rohit Sharma at number four. After making his series debut against Sri Lanka in July last year, Maharashtra’s ‘run machine’ Ruturaj could only play eight balls, but he timed the ball well. But could not last long and get out in the third over. Ishaan, who was the highest seller in the Indian Premier League 2022 mega auction, did not do well in the first two T20Is.

He hit three fours in the fourth over off four balls of Romario Shepard. Ishaan hit five fours in his 31-ball innings. Chasing this target, West Indies soon lost the wickets of openers Kyle Meyers and Shai Hope. In his two overs, Deepak Chahar got both these players caught behind the wicket by Ishan Kishan. But after that, he could not complete the second overdue to muscle strain, due to which Venkatesh Iyer bowled the last ball of his over. Wicket-keeper batsman Nicholas Pooran and Rovman Powell were at the crease. Both were trying to score runs fast.

In the seventh over, Rovman Powell picked up Harshal Patel’s delivery at fine leg and Shardul Thakur took a brilliant catch by running back. In this way, Rovman’s innings of 25 runs in 14 balls studded with two sixes and two fours came to an end. West Indies then quickly lost three wickets. But Puran stood at his end, during which he also got a lifeline once. Venkatesh Iyer forced skipper Kieron Pollard (05) into deep cover where he was caught by Ravi Bishnoi and West Indies lost their fourth wicket for 82 runs. Then Venkatesh Iyer got the team the fifth wicket in the form of Jason Holder. Roston Chase (12) was bowled by Harshal Patel.

Romario Shepard was now with Pooran. Pooran completed 50 runs in 39 balls during this period. He thus scored his third consecutive fifty in this T20I series. West Indies needed 37 runs in the last three overs to win and their hopes were pinned on Pooran and Shepard. Shepard had hit three high-rise sixes. And India got the important wicket of Pooran by Shardul Thakur. Pooran lifted his slow ball very high and Ishan Kishan ran away and took the catch.

Shepard then sat high on Harshal Patel’s delivery and Rohit took a catch to end his innings of 29 runs. Indian captain Rohit then took a brilliant catch and took the delivery of Shardul Thakur and reached the Dominic Drakes pavilion. India made his T20 International debut by Avesh Khan who conceded 42 runs in his four overs.

22/07/2022/9:02:pm
New Delhi: According to the big news coming from Syria, Israel has now launched a missile attack on its capital Damascus. 3 Syrian soldiers...

30/09/2020/12:51:am
London, United Kingdom:  Moody’s announced today that it has enhanced Moody’s CreditView, its leading research, data and analytics platform serving credit market professionals, with a...