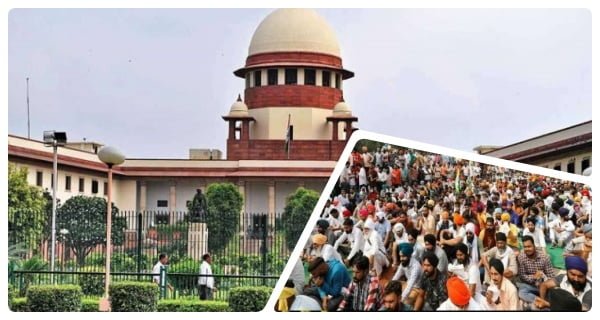 New Delhi: The applications challenging the three new farm laws of the Modi government were heard in the Supreme Court on Tuesday for the second consecutive day. After three and a half months, these three laws have got braked. For the time being, the court has stayed the implementation of the three agricultural laws. The court has also constituted a committee of 4 members to resolve the farmers’ deadlock with the farmers movement and the government. Jitendra Singh Mann (Bhartiya Kisan Union), Dr. Pramod Kumar Joshi (International Policy Head), Ashok Gulati (Agricultural Specialist) and Anil Shetkari (Shetkari Sangathan, Maharashtra) are members of this committee. Farmers across the country have been agitating at different borders in Delhi for 49 days over the withdrawal of agricultural laws.

Earlier, during the debate, petitioner ML Sharma said – ‘The farmers have refused to appear before the committee to be set up by the Supreme Court. Farmers say that many people are coming for discussion, but the Prime Minister is not coming forward. On this, Chief Justice SA Bobde said- ‘We cannot speak to them, they are not a party in this matter’.

CJI SA Bobde said that those who are lawyers should respect the judicial process. It is not possible that when the order is not right, they will be rejected. We are not seeing this as a matter of life-death. We have a question of validity of law. It is in our hands to keep the implementation of the laws postponed. People can raise the remaining issues in front of the committee.

CJI said that if you just have to perform without any solution, then you keep on performing indefinitely. But will he get anything? That will not solve. We want to make a committee only to find a solution.

Regarding the committee, the Supreme Court made it clear, ‘This committee will be for us. People associated with this issue will appear before the committee. The committee will not give any order, nor will anyone punish. It will only hand over the report to us. We are concerned about the legality of agricultural laws. At the same time, farmers also care about the life and property of the people affected by the movement.

Regarding the committee, the Supreme Court said, ‘We are trying to resolve the issue by staying within our boundaries. This is not politics. There is a difference between politics and judicial. You have to co-operate.

The Chief Justice of the Supreme Court again said, ‘We will postpone the implementation of the agricultural law, but not indefinitely. Our aim is just to create a positive environment. There should not be that kind of negative thing like ML Sharma did at the beginning of the hearing today. Farmers’ lawyer Sharma had said that farmers will not go to the committee. Law should be repealed.

The court sternly stated, ‘No power can stop us from setting up a committee to evaluate the merits and demerits of agricultural laws. This committee will be part of the judicial process. The committee will tell which provisions should be removed, then it will deal with the laws.

PS Narasimha told the court that banned organizations are also fueling the movement. After this the CJI asked the Attorney General if you confirmed it. The attorney said that I will find out and tell you. After this, the CJI said that you should give an affidavit on this till tomorrow.

You should answer on this aspect till tomorrow
The CJI said that in our order, we will ask that the farmers ask the Police Commissioner of Delhi for permission to perform at Ramlila Maidan or any other place. Application is given to the administration for the rally. Police holds the conditions. Cancels permission if not followed.

The CJI said that in our order, we will ask that the farmers ask the Police Commissioner of Delhi for permission to perform at Ramlila Maidan or any other place. Application is given to the administration for the rally. Police hold the conditions. Cancels permission if not followed.

15/08/2020
Jaipur: Monsoon activity continues in Rajasthan. There is a possibility of rain in many parts of the state on Saturday as well. The Meteorological...

Shivraj government’s unique order, Kanyapujan to be done before all government events

24/12/2020
Bhopal: Chief Minister Shivraj Singh Chouhan, popularly known as Mama Ji in the entire state, has said that all the government programs will be...

18/06/2020
New Delhi: Its a good news for those who hates politics. Facebook chief Mark Zuckerberg said that his users would be able to block...

15/01/2021
London: British scientists have claimed that patients recovering from Coronavirus can also spread the infection to others. The results of an official study released...

31/08/2020
Pune: To simplify the process of authentication while selling shares from Demat Account, and to make it more secure, Bajaj Financial Securities Limited (BFSL)...