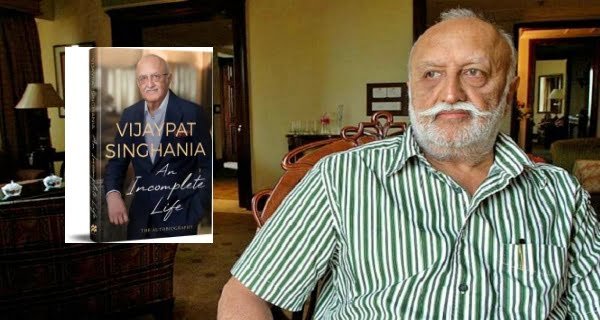 Mumbai: The Bombay High Court on Thursday banned the sale, promotion, and distribution of ‘An Incomplete Life’, a biography of industrialist Vijaypat Singhania. 83-year-old Singhania, former chief of Raymond Group, is in a legal battle with his son Gautam Singhania and Raymond Company over the release of this book.

Singhania and Gautam live separately and the relationship between the two is not good. In 2019, Raymond Limited and its head Gautam Singhania filed suit in a sessions court in Thane district and a civil court in Mumbai, urging that the claims made in the book were outrageous. Later, a Thane court banned the book from entering the market. The company on Thursday moved the high court claiming that Vijaypat Singhania made the book available to the readers “secretly” last Sunday.

A vacation bench of Justice SP Tawde heard Raymond’s plea and issued an order banning the sale, circulation, and distribution of this book. The company had demanded that the publisher of this book ‘Macmillan Publishers Private Limited’ be directed not to further distribute, sell and disseminate this book.

Two airstrips on expressway for landing-takeoff of fighter plane

25/01/2021/9:38:am
Lucknow: In Uttar Pradesh, the AirStrip has also been completed on Purvanchal Expressway being constructed from the capital Lucknow to Ghazipur. With 3300 meters...

Denmark has extended ban on AstraZeneca’s Corona vaccine, will not be used for three...

26/03/2021/10:12:am
Copenhagen: The Danish government on Thursday decided to keep the AstraZeneca Covid-19 vaccine (Vaccine) suspended for three more weeks. Denmark stopped the use of...