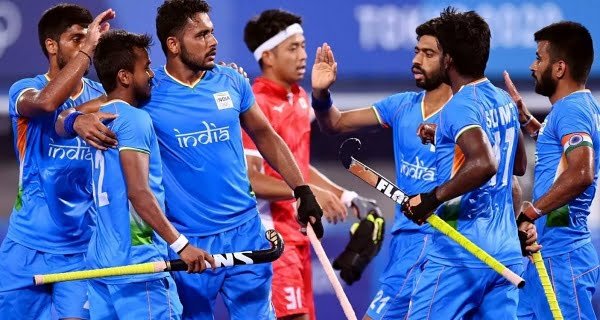 New Delhi: Eight-time Olympic gold medalist Indian men’s hockey team made it to the semi-finals of the Tokyo Olympics. The Indian Men’s Hockey Team, captained by Manpreet Singh, defeated Britain 3-1 in the quarter-finals on Sunday. It is after 49 years that India has made it to the semi-finals of the Olympic Games in men’s hockey. In this match, Dilpreet Singh, Gurjant Singh, and Hardik Singh scored 1-1 for India, while Britain’s only goal was scored by Ward on the penalty corner moments before the end of the third quarter.

India’s last medal at the Olympics was the gold medal at the 1980 Moscow Olympics, but then only six teams participated and the top two teams competed on a round-robin basis for the gold medal. In this way, India has reached the semi-finals for the first time since the 1972 Munich Olympics. India and Britain met for the 9th time in the Olympics and India have now taken its win-loss record to 5-4.

The Indian team performed well in the quarter-final match. In the first quarter itself, he took the lead with Dilpreet Singh’s goal. After this, Gurjant Singh’s goal in the second quarter doubled the lead. Till the half time the score remained 2-0 in favor of India. About a minute before the end of the third quarter, Britain got a penalty corner but could not convert it into a goal. A few moments before the end of this quarter, Britain got another penalty corner and scored a goal to make the score 1-2.

About 6 minutes before the end of the fourth quarter, India got a penalty corner and captain Manpreet Singh was shown the yellow card. Meanwhile, midfielder Hardik Singh, showing great speed, scored a brilliant field goal and made the score 3-1. With this score, India won. India will face Belgium in the semi-final match to be held on August 3. Belgium defeated Spain 3-1 in the quarter-finals. Australia and Germany will meet in the second semi-final.

Apart from the 1-7 defeat at the hands of Australia, the Indian team performed brilliantly in Tokyo. They won four out of five matches in the league stage and made it to the quarter-finals, finishing second in the Pool A table. Britain, on the other hand, registered two wins and two losses, and one draw to finish third in Pool B. India won three consecutive matches after the loss to Australia.

India’s last medal at the Olympics was in 1980 in Moscow, when the team won the yellow metal under the captaincy of Vasudevan Bhaskaran. Since then, the Indian hockey team’s performance declined steadily and could not do better after finishing fifth at the 1984 Los Angeles Olympics. The team failed to qualify for the first time at the 2008 Olympics in Beijing and finished last at the 2016 Rio Olympics.

However, the performance of the Indian hockey team has improved tremendously in the last five years, reaching the third position in the world rankings. After the arrival of Australia’s Graham Reid, who became the coach two years ago, the confidence and fitness level of the players increased. The team that succumbed to the first pressure does not give up till the last minute.

26/04/2022/9:25:pm
New Delhi: The date of IPO of the nation's most awaited IPO LIC has been introduced. Now its value band has additionally been revealed....