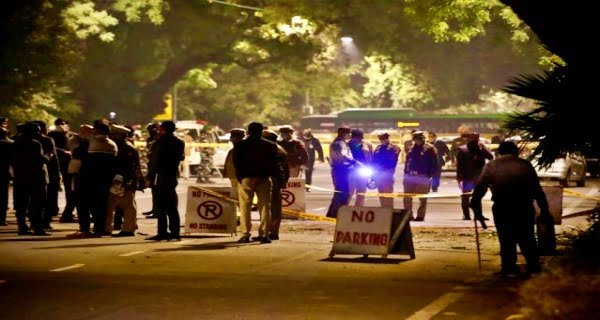 New Delhi: A blast has taken place near the Israeli Embassy in Delhi. However, no one was injured in the blast. But the windows of many cars are broken in this blast. The special team has reached the spot. This is a low-intensity blast and it happened at a distance of 150 meters from the embassy. As soon as the information of this incident was received, the special cell of Delhi Police reached the spot. The blast took place at a time when the ‘Beating Retreat’ program was going on on the highway a few kilometers away from the spot. In which many VVIPs including President Ramnath Kovind, Prime Minister Narendra Modi were present.

The blast occurred in 2012
Significantly, a similar blast had taken place in 2012. In which one person was injured. At that time, the terrorists had planted a bomb on a moving vehicle.

Use of ammonium nitrate in the blast
According to sources, ammonium nitrate has been used in the blast. Sources also said that the IED was hidden near the pavement. The blast is suspected to have been carried out under a terror plot. At present, a special team of Delhi Police and investigating agencies are present on the spot and are investigating the case. The police have cordoned off the entire area. It is being reported that the police are digging CCTV footage. Which shows who has committed such an unholy incident.

Amit Shah took information of the incident
Meanwhile, Home Minister Amit Shah is keeping an eye on the matter from his home. He spoke to the Delhi Police Commissioner on the phone and got information about the blast.

CCTV footage surfaced
According to the information received from the sources, CCTV footage has come to light, in which it was seen that 3 people were in a car. They threw a packet (bomb) from the car and fled from there. However, the police have not been able to find out whether the number of the car has been found or not.

Bomb made in Delhi itself!
Sources also said that the bomb was made in Delhi and the bomb material is also expected to be bought from the Delhi market. Delhi Police formed three special teams to investigate the case. According to sources, DCP Kushwaha’s team will investigate.

Delhi Metro is in loss due to lockdown, Modi and Kejriwal government clash over...

09/08/2020/10:17:am
New Delhi: Metro services, called the lifeline of the common people in the country's capital Delhi, have been closed for the last five months...