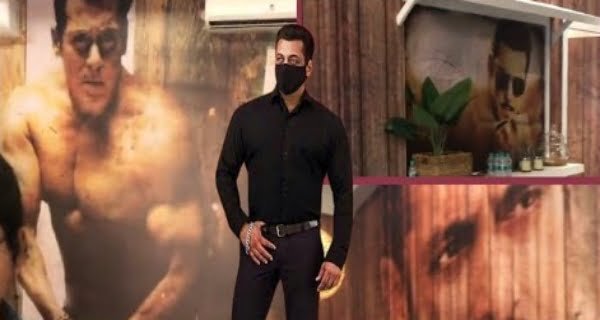 Mumbai: Sometimes controversies and sometimes fighting between fights and celebrities, the show that has garnered tremendous TRP is once again bringing the 14th season. We are talking about the reality show Bigg Boss 14. Discussions are already taking place about this show hosted by Salman Khan. At the same time, there have been speculations about its contestants coming closer. At the same time, we have already shown you the pictures of the magnificent house of Bigg Boss, but now we are going to show you the luxurious house of Salman Khan, which has been designed for this show, which is very beautifully decorated. From the garden, big pictures of Jim and Salman are seen here.

Due to the conditions born due to Coronavirus, Salman Khan will not be able to stand on the stage in front of the audience and host Big Boss, so this house has been prepared. At the same time, fashion designer Ashley Rebelo has shared a video showing the corner of this house. It is visible in this video that even though the space of the house is small but it is decorated very beautifully and all the luxurious things are present in the house. It is shown in the video that there is a big picture of Salman in the living room along with the sofa TV. Watch the video here

Apart from this, there is a gym just behind the living room. After this, there are some pictures of Salman in the bedroom too. Some are small and some are quite large. After this there is a bar garden, where there is a beautiful fountain. Garage is also built to keep the car near the garden. At the same time, there is also a cabin to sit in the middle of the garden. If seen, this house is very beautiful. In particular, the big pictures of Salman Khan engaged in it are very special.

Vijayalakshmi, the first woman officer of the Indian Air Force, passed away

21/10/2020
Bengaluru: The first female officer of the Indian Air Force, Wing Commander (Retd) Vijaylaxmi Ramanan has passed away. She was 96 years old. Her...

The Supreme Court will go against the “fraud” committed against the American people: Trump

04/11/2020
Washington: President Donald Trump on Wednesday claimed in the midst of a series of vote counts in several states that the American people were...

13/12/2020
New Delhi: BJP president JP Nadda has been found to be Corona positive today. He gave information about this himself. He tweeted that after...