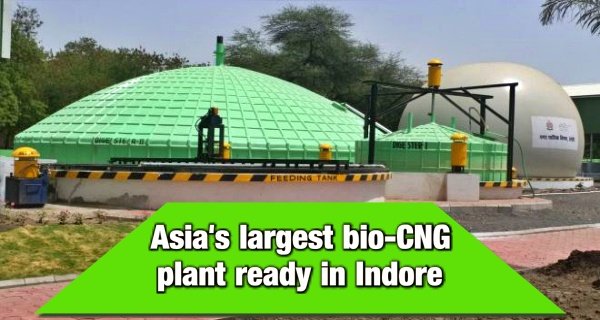 Indore: Asia’s Largest Biomethanation Plant has been completed in the country’s cleanest city, Indore, Asia’s largest and the country’s first waste to the bio-CNG gas production plant. Now preparations are on to call Prime Minister Narendra Modi to Indore for its inauguration. This plant, built at a cost of 150 crores, will generate 18 thousand liters of bio-CNG gas every day. Along with this, 100 tonnes of manure will also be ready. This plant is located on the Devguradia Trenching Ground situated on the hill of Devguradia.

According to the information, the city buses of the city will be run with this gas. Also, municipal vehicles will also run on this gas. Indore MP Shankar Lalwani said that this will be another unique achievement for Indore, which has won the title of the cleanest city in the country five times. This will be the first such plant in the entire country where CNG gas will be made from the garbage collected from the city and city buses will be run from it. He told that due to Covid, it took a while to complete it. Because many parts of the plant have been called from abroad. Now it is completed and this plant will be inaugurated by the hands of Prime Minister Narendra Modi. This is a big achievement for Indore.

Municipal corporations will also earn
Municipal commissioner Pratibha Pal told that this plant will prepare 100 tonnes of good quality city compost along with 18,000 liters of bio-CNG every day. This bio-CNG gas will be used as a vehicle fuel for city buses and other small vehicles. City compost will be used to increase the fertilizer capacity of farmers’ fields. 500 TPD of organic municipal solid waste will be processed in this project. The Municipal Corporation will also sell 50 percent CNG gas and city compost. This will generate substantial income for the corporation. Along with this, the corporation will also get a premium of Rs 1.5 crore per year.

Indore Municipal Corporation has been experimenting for the last two years to make biogas from wet waste from homes, hotels, and other establishments. City buses and auto-rickshaws are running in the city from the gas produced by this. So far, two such plants are operating in the city. Now the corporation is preparing to build the third biogas plant. This plant will be the largest biomethanation plant in Asia. The gas produced here will be used in city buses running in the city. Apart from this, the corporation will also earn more than Rs 2.5 crore per annum in the form of a premium from this plant.

Supreme Court seeks status report from UP government, hearing will be held tomorrow

Serena Williams to meet Victoria Azarenka in US Open semifinals

10/09/2020/9:25:pm
New York: Serena Williams of the United States and Victoria Azarenka from Belarus will meet in the semifinals of the US Open after beating...

Government Employees order to come to office, government offices will not be sealed now

15/02/2021/11:00:am
New Delhi: Government Employees. The Central Government has now prepared to open the government offices which have been closed for a long time due...

20/09/2021/9:52:am
New Delhi: The Supreme Court is likely to hear on Monday the Centre's plea against the Madras High Court's remark that the reservation of...