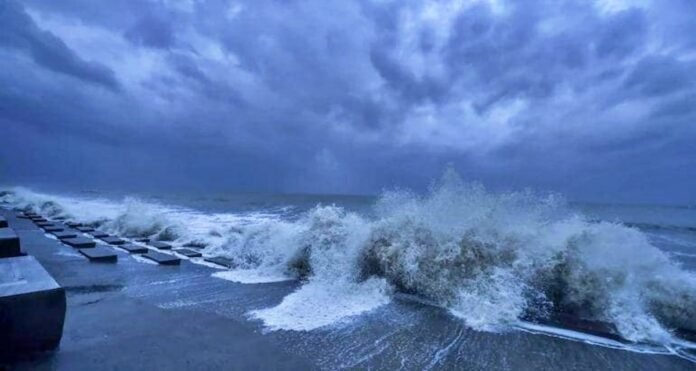 Bhubaneswar: According to the big news of the morning, the cyclone ‘Asani’, which rose from the Bay of Bengal, has now turned into a severe form. Although its movement has weakened even more than before, its danger is still not averted. Here, due to this storm, there is a possibility of heavy rain in Odisha, Bengal, and Andhra Pradesh hence the alert is going on here. On the other hand, the Odisha government has deployed 17 teams of NDRAF and 20 teams of ODRAF in 18 districts.

Even today the effect of the cyclonic storms will be visible
Here, according to the Meteorological Department, the speed of cyclonic storm ‘Asani’, which is moving towards the coast of Odisha, has slowed down a bit. But on reaching its coast, the cyclonic wind speed can reach up to 115 kmph and it can also cause heavy destruction in the coastal areas.

Cyclone ‘Asani’ can cause devastation in these states
Let us inform you that there is a possibility of heavy rain in Arunachal Pradesh and Assam-Meghalaya during the coming 10-13 May and Nagaland-Manipur-Mizoram-Tripura during 09-13 May. So there is a possibility of very heavy rainfall in Assam-Meghalaya during 11-13 May. Heavy to very heavy rainfall is very likely at isolated places over Coastal Andhra Pradesh on May 10. On the other hand, from the evening of May 10, there will be heavy rain at isolated places in Coastal Odisha.

US borrows more than $ 30 trillion, World’s richest country is sinking in debt

02/02/2022/9:15:pm
Washington: The total national debt burden of America has exceeded $ 30 trillion at a record level. The Treasury Department, which comes under the...

NEET college to be opened in Karnataka from October 1, state government announced

26/08/2020/7:45:pm
New Delhi: In the midst of the ongoing controversy over NEET and JEE examinations across the country, the Government of Karnataka has announced the...

08/08/2020/8:19:pm
Dubai: At the last moment, two Indians who were deprived of boarding the Air India Express crashed on Friday are thanking God for this....

Health Ministry: Corona positivity rate more than 10 percent in 44 districts of the...

28/02/2022/10:56:pm
Kharkiv: Russian military attack in Ukraine has intensified. According to the latest information, 11 civilians were killed in a Russian missile attack in Kharkiv....