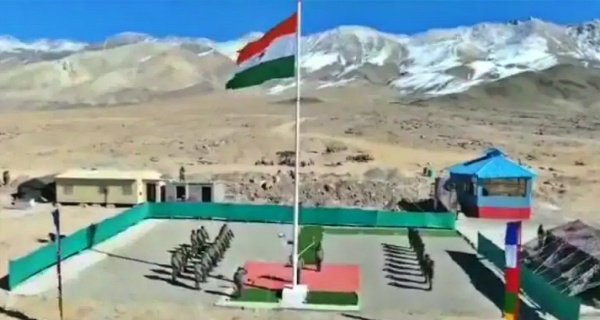 New Delhi: Amidst the ongoing border dispute and tension between India and China, the Indian Army hoisted a 76 feet tall flag in the Hanle Valley of Ladakh. Let us tell you that Hanle Valley is situated at an altitude of 15,000 feet above sea level. This flag was hoisted by the Indian Army’s Fire and Fury Corps in this valley bordering China and shared a video of it on Twitter. In the video, two groups of soldiers are seen saluting the tricolor flag. This flag was manufactured by the Indian Army and the Flag Foundation of India. The Indian Army told that this flag has been hoisted under the Amrit Festival of Independence.

This move of the Indian Army is also being seen as a strong message to the enemies. Earlier on October 2, the world’s largest Khadi national flag was unfurled in Leh. This flag was 225 feet long and 150 feet wide. This historic event was also organized by the Fire and Fury Corps at Leh Garrison, where a huge national flag was hoisted on behalf of Lieutenant Governor RK Mathur on a high mountain. Army Chief General MM Naravane and Northern Command’s Lieutenant General YK Joshi also attended the event. The Indian Army has organized several programs in the past few months in Ladakh to commemorate 75 years of India’s independence.

Film to be made on the life of Mirabai Chanu, she won silver medal...

On the day of Dev Diwali, the ghats of Kashi will be lit with...

27/11/2020/10:56:pm
Varanasi: The government is now preparing to organize a light festival on the ghats of Benaras like Ayodhya. The impression of Ayodhya will be...

07/10/2021/9:27:pm
New Delhi: Terrorist organization 'The Resistance Group' (TRF) has come into the limelight for the continuous civilian killings in Jammu and Kashmir. The organization...