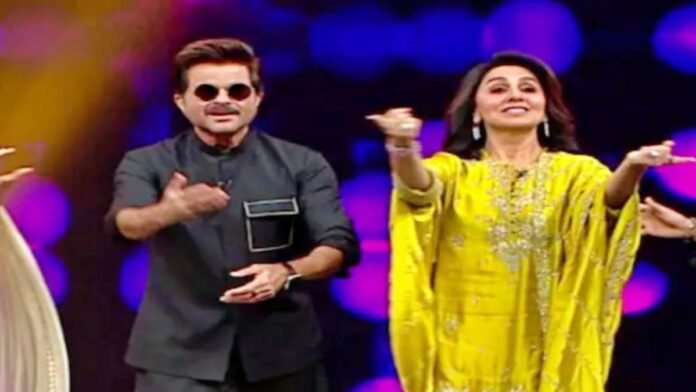 Mumbai: These days Anil Kapoor and Neetu Kapoor are busy promoting their upcoming film Jug Jug Jio. He is traveling to different parts of the country to promote the film. Anil and Neetu danced to the song ‘Ek Main Aur Ek Tu’ during the promotion. This song was filmed by the late Rishi Kapoor and Neetu Kapoor. Trade analyst Ramesh Bala has shared this Neetu-Anil dance video. In a shared video, Neetu and Anil can be seen on a stage with Kiara Advani, Varun Dhawan, and Maniesh Paul.

Let us tell you that the song ‘Ek Main Aur Ek Tu’ is a song from the 1975 film ‘Khel Khel Mein’, in which Neetu Kapoor and her late husband Rishi Kapoor were. In the video, Anil Kapoor was seen lip-syncing and performing a step of Rishi from the song. Neetu was also seen dancing to this song with Anil. Anil’s energy and Neetu’s performance drove the audience present at the event crazy.

Not only this but in the same video, Anil Kapoor was also seen lip-syncing to the superhit song ‘My Name is Lakhan’ from the 1989 film ‘Ram Lakhan’. It was Anil’s superhit film. While Anil did the hook step of the song, Neetu, Kiara Advani, Varun Dhawan, and Maniesh Paul also joined him.

Anil-Neetu dance praises
Sharing the video, Ramesh Bala wrote, “Anil Kapoor and Neetu’s energetic dance on the superhit song ‘Ek Main Aur Ek Tu’ in Delhi during the promotion of Jug Jug Jio.” This dance video of Anil and Neetu is becoming increasingly viral on social media. Fans are praising the dance of both.

Neetu Kapoor’s comeback
Jug Jug Jio is a comedy family drama directed by Raj Mehta and produced by Dharma Productions. Neetu Kapoor is making a comeback with this film. The film will be released in theaters on June 24. The film stars Varun Dhawan, Kiara Advani, Anil Kapoor, Neetu Kapoor, and Maniesh Paul. Social media influencer Prajakta Kohli is making her Bollywood debut with this.

Kim Jong Un in the grip of some deadly disease? Weight reduced by 10...

Team India is now in the grip of Corona, this Indian...