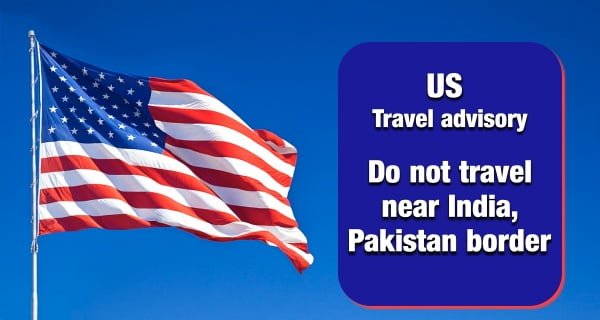 Washington: The US has issued second and third-level travel advisories for India and Pakistan, citing terrorism and sectarian violence. Citizens have been asked to reconsider traveling to Pakistan and caution those traveling to India citing crime and terrorism.

On Monday, the US State Department issued an advisory to India urging US citizens not to travel within 10 kilometers of the Indo-Pak border in Jammu and Kashmir due to terrorist threats, civil discontent, and fears of armed conflict. Is. The advisory said, “Indian authorities report that rape is one of the fastest-growing crimes in India.

Violent crimes, such as sexual harassment, have also come to the fore in tourist places and other places. It said that terrorists can attack tourist places, transport bases, markets/malls, and government institutions with little or no warning. The advisory noted that the US government has limited ability to provide emergency services to US citizens in rural areas of western West Bengal, eastern Maharashtra, and northern Telangana because US government employees are specifically permitted to travel to these areas.

In an ongoing advisory to Pakistan, the State Department urged US citizens not to travel to Balochistan province and Khyber Pakhtunkhwa (KPK) province, which includes the former Federally Administered Tribal Areas (FATA), citing the threat of terrorist attacks and kidnappings. Is. Along with this, due to the possibility of armed conflict, it has also been asked not to go to the areas near the Line of Control. “Terrorist organizations are still planning attacks in Pakistan,” the advisory said. The local history of terrorism and ideological aspirations of violence by extremist elements has led to indiscriminate attacks on civilians as well as local military and police targets. Terrorists can attack transport bases, markets, malls, military institutions, schools, hospitals, airports, universities, tourist places, religious places, and government institutions with little or no warning.

The advisory issued to Pakistan said that terrorists have also targeted US diplomatic and diplomatic institutions in the past. The consultation said that the security environment in Pakistan has improved since 2014 when Pakistani security forces have been carrying out counter-terrorism operations.

Major cities, especially Islamabad, have more security resources and infrastructure, and security forces in these areas may be able to respond to an emergency more easily than in other regions of the country. The threat remains, even though terrorist attacks are rare in Islamabad. It said that in view of the security situation, the US government has limited capacity to provide emergency services to American citizens in Pakistan.

12/06/2021/10:56:am
New Delhi: The effect of the second wave of Corona is now gradually decreasing. The number of corona-infected patients has been less than 1...

16/09/2020/10:53:pm
New Delhi: Union Minister Nitin Gadkari has been found infected with the Coronavirus. The minister has given information about this by tweeting. Gadkari has...

Digitization Demands a New Approach to Tackling the Cyber Threat

09/08/2021/2:22:pm
New York:  Organizations across the world have made strides in remote working and collaboration during the COVID-19 pandemic, but the proliferation of digitization is creating...