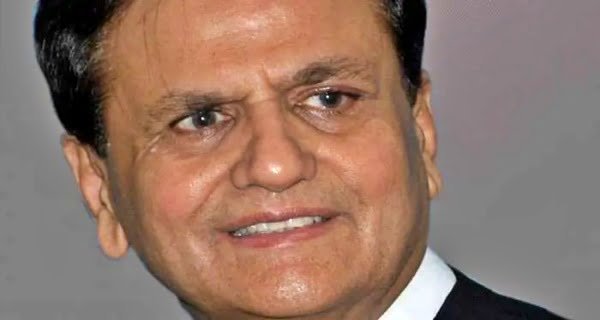 New Delhi: Senior Congress leader Ahmed Patel passed away early Wednesday. This information was given by his son Faisal Patel through a tweet. At the same time, Faisal appealed to all to follow the Corona guidelines. Senior Congress leader Patel, who was undergoing treatment at a hospital in Gurugram after a positive test for COVID-19, breathed his last on Wednesday morning, his son Faisal confirmed. In a tweet, Faisal said that a Rajya Sabha MP from Gujarat died at 3.30 am on Wednesday.

He tweeted, “Saddened by the demise of Ahmed Patel. He spent many years in public life. Served the society. Known for his sharp mind, his role in strengthening the Congress party will always be remembered. ”

Rahul Gandhi said, “Today is a sad day. Ahmed Patel was a pillar of the Congress party. He always lived for the party and always stood by the party in difficult times. They will always be missed. ‘

Expressing grief over the demise of Ahmed Patel, Congress leader Digvijay Singh said, “Ahmed Bhai was a very religious person and no matter where he lived, he never missed praying. Today Dev Uthni Ekadashi is also very important in Sanatan Dharma. May Allah grant him a high position in Jannat-ul-Firdaus. Amen. ”

He said, “Ahmed Patel is no more. An integral friend went trusted companion. We have been together since 1977. They reached the Lok Sabha and I reached the Vidhan Sabha. For all of us Congressmen, they were the medicine of every political merge. He was known for being soft-spoken, well-behaved and always smiling. ”

He tweeted, “No matter how angry anyone gets, they had this ability, they would send him only after satisfying him. Away from the media, but involved in every decision of the Congress. He could also learn to say bitter things in extremely sweet words. The Congress party can never forget his contribution. May Ahmed Bhai remain immortal. ”

Ahmed Patel from Gujarat was the political secretary to Congress president Sonia Gandhi. He was the only person who had to come and go directly in 10 Janpath. He was loyal to Sonia-Rahul and was also the tallest politician in the party. The instructions and signals of the Congress high command were conveyed to other big leaders through him.

All old records are broken of placements in IITs! Crores of offers rained on...

14/04/2022/10:22:am
Mumbai: Ranbir Kapoor and Alia Bhatt are going to take 7 rounds (Ranbir-Alia Wedding) today and tie this relationship of love into the relationship...