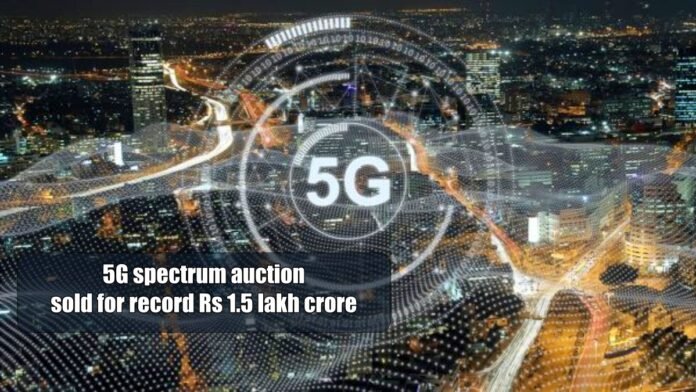 New Delhi: The biggest ever spectrum auction in India ended on Monday. The seven-day auction saw a record sale of a 5G telecom spectrum worth over Rs 1.5 lakh crore. In this auction, billionaire businessman Mukesh Ambani’s company Jio made the highest bid to consolidate its leading position.

Sources privy to the matter said that as per the provisional figures, a total of Rs 1,50,173 crore bids were placed. This auction amount of 5G spectrum capable of offering extremely high-speed mobile internet connectivity is almost double the Rs 77,815 crore 4G spectrum sold last year.

This amount is three times as against Rs 50,968.37 crore received from the 3G auction in 2010. Reliance Jio made the highest bid for radio waves offering connectivity at speeds nearly 10 times faster than 4G. It was followed by Bharti Airtel and Vodafone Idea Limited.

The Adani group is said to have bought 26 MHz of spectrum for setting up a private telecom network. Sources said the details of which company bought the spectrum will be known only after the auction data is out in full. The government had offered spectrum in 10 bands, but no bids were received for spectrum in the 600 MHz, 800 MHz, and 2300 MHz bands. About two-thirds of the bids were for the 5G band (3300 MHz and 26 GHz), while more than one-fourth of the demand came in the 700 MHz band. The band went unsold in the last two auctions (2016 and 2021).

In the auction held last year, Reliance Jio had taken a spectrum worth Rs 57,122.65 crore. Bharti Airtel had bid for around Rs 18,699 crore and Vodafone Idea had bought spectrum for Rs 1,993.40 crore. A total of 72 GHz radio waves worth at least Rs 4.3 lakh crore were put up for bid this year.

Most Asian markets gain momentum on relief measures in America

08/10/2020/9:41:pm
Tokyo: Most of the Asian markets are on the upside during trading on Thursday due to the resumption of hopes of new relief measures...

11.5 percent children infected with corona in second wave, lowest number of cases after...

15/06/2021/9:05:pm
New Delhi: Amidst the decreasing speed of Coronavirus and the fear of the third wave, the Health Ministry organized a press conference. In this...

Yakub-Haqqani factions over government formation in Afghanistan, what will Taliban do...

Document to be submitted by 28 February, or else pension will...