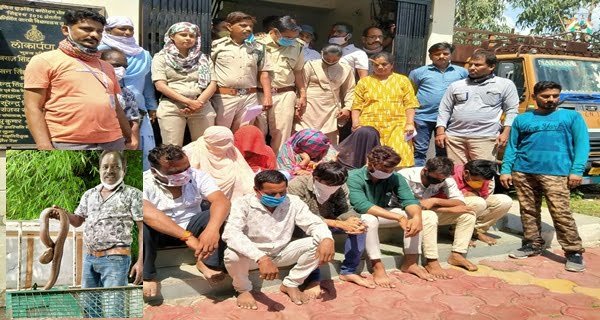 Ujjain(MP): The STF team has detained 10 females and men in two cars carrying a rare species of snake and owl. The owl has come to be worth three crores and the snake is worth a quarter to two crores rupees. Wildlife has been handed over to the forest department. The accused were produced in the court.

STF Superintendent of Police Gitesh Kumar Garg said that after receiving information about the smuggling of rare species of snakes and owls, a team was formed along with Deputy Ranger Uday Raj Pawar of Forest Department and 2 car number MP 09 on Shanti Palace Bypass Road. W D 1151 and MP 09 C J 4370 restrained. There were 4 women and 6 men in the car, who were interrogated and searched the belongings and bags. In a bag, a rare species of snake called Chaklon two mouths and a golden owl was recovered. The STF team seized both the cars and brought the accused along with wildlife to the police line office for questioning. Where it was revealed that all people are involved in the smuggling of rare wildlife. Rare species of snakes and owls were handed over to the forest department team and all the accused involved in the smuggling were produced in the court. With the permission of the court, the forest department team will safely release the wildlife into the forests. Trafficking included spouses. Whose car had a doctor’s mono and a curfew pass of Kovid-19 transition issued by the subdivisional officer of Dewas district? Which has been released in May from Hatpipalia to Indore? The accused will be questioned on remand. At present, he is said to have caught snakes and owls from the surrounding forests between Ujjain Dewas.
Snake and owl cost in crores

According to the STF Superintendent of Police, the weight of the rare species snake has been revealed to be 6 kg 500 grams. The price of which is coming to twenty-five million rupees. At the same time, the price of a golden owl is said to be 3 crores. Rare species of snake are used in power-boosting medicine and other diseases. The owl has been reported to be used in the case of Tantra Kriya and for extracting money hidden in the ground.

Case filed against Shweta Tiwari in Bhopal for objectionable remarks in the name of...

28/01/2022/10:04:am
Bhopal: TV actress Shweta Tiwari is in the headlines these days. Recently in Bhopal, he made a controversial statement about God, after hearing which...

16/07/2020/12:30:am
Kanpur: Due to COVID Pandemic People are nowadays afraid of touching anything around, specifically in the areas where masses have to come. To solve...

Search for Test captain is over, Rohit Sharma will take over the command of...

Chardham Yatra may start soon in Uttarakhand! know how?