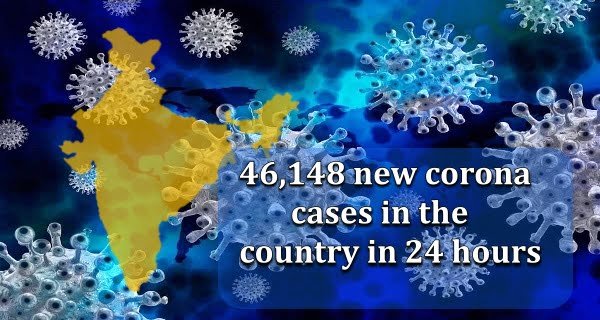 New Delhi: There is still a risk of Coronavirus infection in the country and the world. Day by day, new variants (Corona Variant) and corona virus are taking more people in their clutches. But now it is a matter of relief that the number of new corona cases coming daily in the country is continuously decreasing. According to the data released by the Ministry of Health on Monday morning, a total of 46,148 new cases of Covid-19 infection were registered in the last 24 hours. At the same time, 979 people died during this period.

So far, more than three crore cases of corona infection have been reported in the country. However, it is a matter of relief that out of this two crore 93 lakh people have been cured by beating Corona. At the same time, this virus has killed 3,96,730 people so far.

Meanwhile, the good news is that there has been a decline of 38 percent in the number of average deaths due to corona in the week ended on Sunday. With this, the 7-day average of daily deaths since April 12 has come down to below 1000. According to the data, 979 people have died due to corona infection in the country on Sunday.

State-wise figures of coronavirus infection
At the same time, for the first time after April 12 in the country, on June 27, the number of deaths due to corona infection has been recorded below 1000. In this, there has also been a decline of 45 percent in the deaths due to corona last week i.e. between 14 and 20 June. This is the biggest drop since last year.

Along with this, according to the data released by the Ministry of Health on Sunday, 50,040 new cases of Covid-19 were reported in the country on Saturday. 1258 people died in the same period. The national rate of patients recovering from the coronavirus has improved to 96.75 percent, while the weekly infection rate has come down to 2.91 percent. The daily infection rate is 2.82 percent.

01/02/2021/10:08:pm
Islamabad: In a shocking revelation, a Pakistan Army general has acknowledged the role of China in "crushing" the Baloch independence movement in Pakistan. He...

17/08/2020/9:21:pm
Mumbai: Other borrowers, including the State Bank of India (SBI), are looking for alternatives for home loan restructuring so that the total tenure of...

28/07/2020/8:15:pm
New Delhi: The much-awaited Rafale aircraft will reach India on Wednesday. On Monday, refueled mid-air pictures of the Rafale aircraft that came out of...