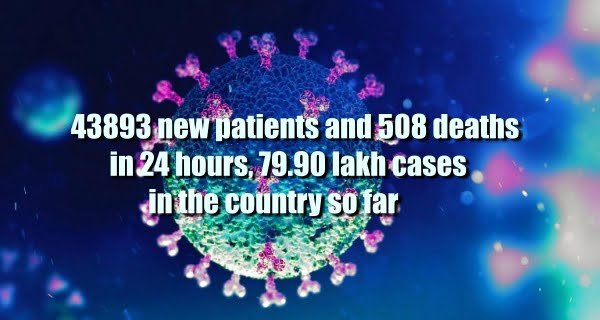 New Delhi: The number of coronavirus infected in the country has reached 79 lakh 90 thousand 332. In the last 24 hours, 43 thousand 893 people became infected with Corona. 508 people were killed yesterday. 1 lakh 20 thousand 10 patients have died from corona till now. The good news is that so far 72 lakh 59 thousand 505 people have been cured of this virus. The number of active cases of corona virus i.e. patients undergoing treatment is declining rapidly. On Monday, it decreased by 28 thousand 132. This is the second largest decline ever. Earlier, on September 21, the highest number of 28 thousand 653 active cases was reduced. At present 6 lakh 10 thousand 803 patients are undergoing treatment.

In terms of recovery, India is at the top among the five most infected countries in the world. The recovery rate in India is over 90%. This means 90 out of every 100 patients are recovering. Brazil ranks second in terms of better recovery. The recovery rate here is 89.65% and in Russia it is 74.84%. The worst situation is in France. Only 9.69% of the patients have recovered so far.

In the country’s capital Delhi, there has been a huge surge in new cases of corona. In the last 24 hours, 4853 new cases of corona infection have come to light in Delhi, which is a new record in itself. The number of corona cases in Delhi has increased to 3,64,341. In the last 24 hours, 44 people have died in the capital. So far 6356 people have died from corona infection. The number of active cases is 27,873. So far a total of 3,30,112 patients have been cured.

In Uttar Pradesh, 1986 new patients were found on Tuesday, 2335 people were cured and 38 patients died. So far 4 lakh 74 thousand 54 people have been found infected. Of these, 26 thousand 267 patients are undergoing treatment, while 4 lakh 40 thousand 847 people have recovered. Corona has so far claimed 6940 lives in the state.

678 people were found infected in Bihar on Tuesday. 9073 people recovered and 7 patients died. So far 2 lakh 13 thousand 383 people have been infected. Of these, 2 lakh 3 thousand 244 people have recovered. The infection has so far killed 1065 people.

How much testing has taken place so far?
The Indian Council of Medical Research (ICMR) today said that a total of 10 crores 54 lakh 87 thousand 680 samples were tested for coronavirus in the country till October 27, out of which 10 lakh 66 thousand 786 samples were tested yesterday.

How many cases of corona in the world?
Coronavirus has infected 44 million people worldwide so far. Of these, 3 crores 10 lakh 23 thousand 333 people have recovered. Meanwhile, 11.67 lakh people have lost their lives. Worldwide, 2 lakh 50 thousand 164 patients have been found in 24 hours, and 3620 have died.

Corona cases are on the rise in European countries. More than 15,000 cases of infection are found every day in Italy, France, and Spain. There were 21,994 cases in Italy on Tuesday. The number of infected people here has reached 5.64 lakh, while 37700 people have lost their lives.

17/10/2020/10:21:pm
Washington: In the US presidential election, Joe Biden, a Democrat candidate, greeted the Hindu festival Navratri on Saturday and once again wished the victory...