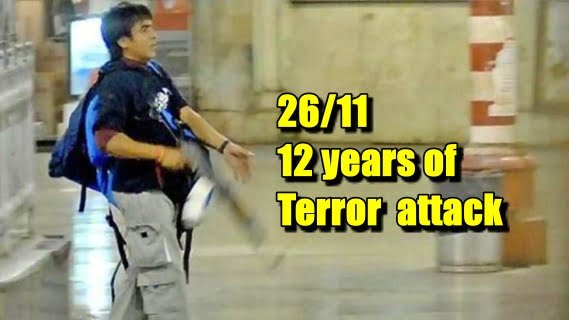 Mumbai: Today is the 12th anniversary of the Terrorist Attack that took place in Mumbai. On this very day, November 26, 2008, 10 terrorists who came by sea from Pakistan had created such a horrific orgy and scene of violence and bloodshed in the economic capital of the country, Mumbai, which the whole world saw as fear, hatred and Was stunned with anger. By the evening of November 26, 2008, everything was normal, but as the darkness began to take Mumbai in its lap, the screams on the streets of Mumbai became louder and louder. On that frightening evening, ten terrorists of Jaish-e-Mohammed had entered Mumbai by sea.

What happened in Mumbai today:
It seems that it started about three days ago. In fact, on November 23, these circumcised terrorists of Pakistan had left Karachi by a boat. In the sea, they first captured an Indian boat and killed four of its companions. After this, when he reached near the Mumbai coast, he also killed the last Indian present on the boat. Then, as soon as they set foot in Mumbai, these terrorists were divided into six different pieces. Their clear motive was to kill as many people as possible. Due to this, they started firing indiscriminately on the innocent people present at Chhatrapati Shivaji Terminus at around 9.21 pm. This bloody attack was carried out by terrorists named Ajmal Kasab and Smile Khan. Kasab was captured on CCTV for the first time here. In this footage you can clearly see the AK-47 in his hands and he was constantly targeting people.

Attack on Nariman House:
Ten minutes after the attack, another group of terrorists attacked the Nariman House Business and Residential Complex. Here they shot people at close range. Here a nanny rescued a child, who was later sent to Israel by his grandparents. The terrorists also blew up the elevator here. Besides, bombs were detonated at many places.

A terrorist then blew up a gas station near it. When people came out after hearing the sound of this explosion, these terrorists targeted them with their bullets. But so far no one was able to understand what was happening. Gradually the news of this terrorist attack started spreading everywhere. People were taking news of their relatives and were seen giving information about the attack. By now, the police had also taken to the streets with their weapons and troops for security.

Bloodshed at Cafe Leopold:
A group of terrorists targeted the famous coffee house ‘Cafe Leopold’ for foreigners. In the indiscriminate firing that took place here, about ten people were killed on the spot. After leaving here, these terrorists also detonated a bomb in a taxi in which five people were killed. After carrying out the attack on Chhatrapati Shivaji Terminus, Kasab’s group approached Cama Hospital. At the gate here, many brave police officers of Mumbai Police had to wash their hands of their lives as they stopped him. After leaving here, these terrorists grabbed the police van and opened fire on the people on the side of the road. This vehicle was later stopped by police assailants with their lives in their hands and ASI Tukaram Omble was present in it. He was the one who grabbed Kasab in his grip in this way and even after getting several bullets in his chest, he could not free himself from his grip. After this, Kasab was arrested alive.

Terrorists also terrorize Taj and Oberoi hotels:
The terrorists targeted the Taj and Oberoi hotels after the attack. It was around 12 o’clock at night and police vehicles were speeding towards Nariman House and Taj. But in the meantime, the terrorists had wreaked havoc at the Taj Hotel. Looking at the CCTV footage, it is revealed that what came in front of them killed them and moved on. The sounds of several bomb blasts were also heard in ‘Taj’. Meanwhile, by this morning, the central government had handed over the case to Special Commando Force ‘Marcos’. But by noon the case was again handed over to the Black Cat Commando. Gradually, this group of Japanese commandos had moved towards Nariman House, Taj and Oberoi. Many people were evacuated from both the hotels in the presence of commandos. However, some commandos were also injured.

The adventures of Black Cat Commandos:
The next day, on the morning of November 28, the commando was landed on the roof of Nariman House by MI 6 helicopter. Commandos were already present on the surrounding buildings. There were constant shootings between the terrorists and the commandos. Many people had been evacuated. Gradually the commandos not only managed to break into the building but also declared Nariman House safe by killing the terrorists. Similarly, the terrorists had been completely eliminated from Hotel Oberoi by 2.30 pm.

Now the last main target of these commandos was to eliminate the terrorists present in the ‘Taj Hotel’ and declare it safe. It was also the splendor of Mumbai, which the terrorists had ruined so far. The commandos were slowly declaring it safe as well. Meanwhile, all the terrorists present here were also killed. The only terrorist caught alive during the entire attack was named Ajmal Kasab. Kasab was caught by Sanjay Govilkar, who was later awarded the President’s Police Medal.

Execution of Kasab:
After this, on November 21, 2012, Kasab was hanged in Yerawada Jail, Pune. The 26/11 attacks killed 174 people and injured more than 300. This terrorist attack was truly a bloodbath on the soil of Mumbai on the night of November 26, 2008, but India learned a lot from this attack and became a country that resolutely fought terrorist attacks. Today, India believes in ‘infiltrating and killing’ terrorists in their country.

15/06/2020
Mumbai:The Bombay High Court on Monday 15 June allowed all airlines to be able to seat passengers inside the middle seat, but said that...