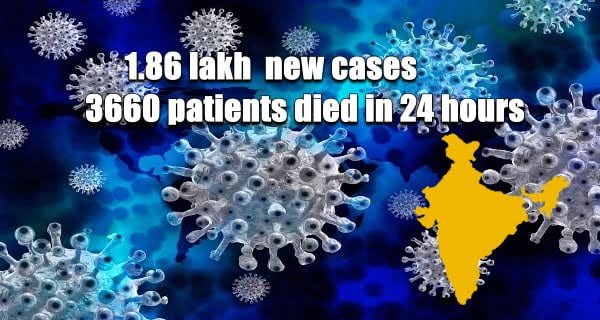 New Delhi: After the Coronagraph climbed in the country on Wednesday, the Corona infection’s pace has weakened sharply once again. On Wednesday, while the corona figures crossed 2.11 lakh, today the number of corona-infected patients has gone down to 1.90 lakh. According to the Ministry of Health data, 1 lakh 86 thousand 364 new cases of corona have been reported in the country in the last 24 hours, while 3,660 patients have lost their lives during this period. After the arrival of new cases of the corona, now the total number of infected patients in the country has increased to 2 crores 75 lakh 55 thousand 457.

According to the Ministry of Health, so far there are 23 lakh 43 thousand 152 active cases in the country from Corona, while 2 crores 48 lakh 93 thousand 410 people have recovered and gone to their homes. So far, 3 lakh 18 thousand 895 people have died from Corona in the country. Even in Maharashtra, there is a lot of relief from the corona.

21273 new cases of corona found in Maharashtra
On Thursday, 21,273 new cases of Covid-19 were reported in Maharashtra, raising the total infection cases in the state to 56,72,180, while the death toll from the epidemic in the state increased to 92,225 with 425 patients killed. According to the Health Department, so far 5672180 people have been infected with corona in the state and out of these 5276203 people have been cured. So far 92225 patients have died. At present, 301041 patients are under treatment.

1977 new cases of corona reported in Madhya Pradesh
On Thursday, 1,977 new cases of coronavirus infection were reported in Madhya Pradesh, due to which the total number of infected people in the state increased to 7,73,855. In the last 24 hours, 70 more people died due to Covid-19 infection in the state. So far, the number of people who have died from this disease has increased to 7,828 in the state. According to the Health Department, 577 new cases of Covid-19 came in Indore on Thursday, 409 in Bhopal, and 99 new cases in Jabalpur. Out of a total of 7,73,855 infected people in the state, 7,27,700 patients have become healthy so far and 38,327 patients are undergoing treatment.

Uttarakhand 2146 new Kovid patients found, 81 dead
On Thursday, 2146 new Covid patients were found in Uttarakhand and 81 other patients died of epidemics while two more patients suffering from black fungus lost their lives. According to the Health Department, the number of patients infected with the coronavirus in the state has been 323483. In the latest cases, a maximum of 330 Covid patients was found in the Dehradun district, 261 in Nainital, 252 in Pithoragarh, 219 in Haridwar, and 205 in Udham Singh Nagar. Apart from this, a total of 6201 corona infected in the state have lost their lives, including the latest deaths.

How much testing and vaccine has been done so far?
Talk about vaccination, till May 27, 20 crores 57 lakh 20 thousand 660 corona vaccine doses have been given all over the country. On the previous day, 29 lakh 19 thousand 699 vaccines were applied. At the same time, more than 33 crores 90 lakh corona tests have been done. On the previous day, 20.70 lakh corona sample tests were conducted, whose positivity rate is more than 8 percent.

22/03/2021/9:27:am
New Delhi: There can be a significant change in the weather of North India. Meteorologists predict that there may be heavy thunderstorms and rains...

03/05/2021/10:35:am
New Delhi: Amid the worrying surge in Covid-19 cases and shortage of vaccines across the country, Serum Institute of India chief executive Adar Poonawalla...

04/01/2021/9:36:am
Chandigarh: The Haryana Police released tear gas shells on Sunday evening near Masani Dam in Rewari district on a group of farmers going towards...

25/07/2020/8:43:pm
Washington: The Trump administration on Friday made major changes in its norms to export drones to its friendly countries. Under the new policy, drones...