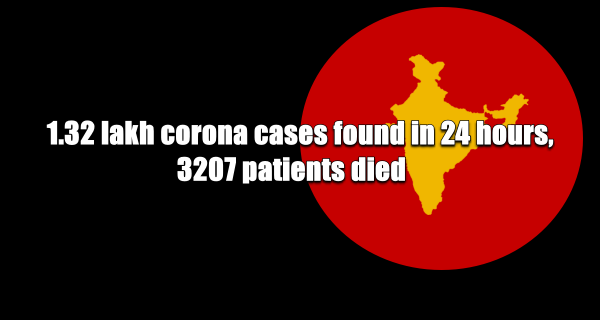 New Delhi: The second wave of Coronavirus in the country seems to be weakening. In the last 24 hours, the corona report of 1 lakh 32 thousand 788 people across the country came positive. During this, 3207 people also died due to infection. However, 2 lakh 31 thousand 456 infected were also cured. On Tuesday, a maximum of 35 thousand 949 people defeated Corona in Maharashtra. 31,683 people recovered in Tamil Nadu, 29,271 in Karnataka, and 24,117 in Kerala.

Most deaths in these states in May The deaths due to corona in May raised such concern of Delhi, Punjab, and Uttarakhand that the highest death rates were seen in the country. Delhi recorded a 2.9% Kovid Mortality Rate (CFR) in May, which is the highest among the major states of the country. This is more than double the national average (1.3%) during the same month. In addition, two other states, Punjab (2.8%) and Uttarakhand (2.7%) recorded more than double the national average. In this way, May has proved to be the deadliest month of the epidemic.

16/09/2020/7:53:pm
Tel Aviv: The news of rocket attacks between Israel and Palestine has once again come. According to Israel Defense Forces, 15 rockets were fired...

16/05/2021/7:55:pm
London: The British government has once again refused to disclose the diaries and letters of the last Viceroy of India, Lord Mountbatten, and his...

Kailash Vijayvargiya confessed, spent on this seat along with spending money and setting

24/06/2020/11:20:am
Indore: After the audio of CM Shivraj Singh, who exposed the demise of Kamal Nath government, now BJP leader Kailash Vijayvargiya also created a...

18/06/2021/9:38:pm
Washington: The US embassy in Afghanistan has ordered a near-complete closure due to the increasing cases of coronavirus among its employees. The embassy, ​​already...
© Copyright 2021 - Palpalnewshub
MORE STORIES