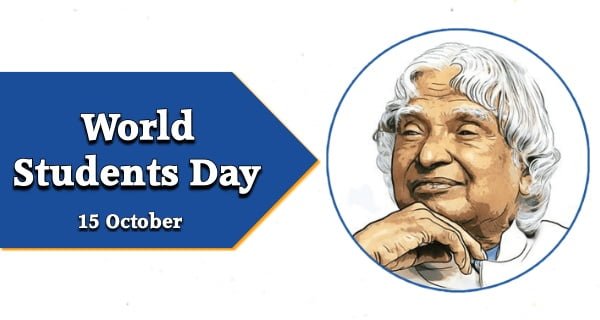 New Delhi: Every year on the occasion of his birth anniversary, former President of the country APJ Abdul Kalam, ‘World Students’ Day’ is celebrated all over the world on 15 October. Let us tell you that this year we are celebrating the 90th birth anniversary of ‘Missile Man’ Kalam. Today, on the occasion of ‘World Students Day’, we are giving you important information related to this……

History of World Students Day
In 2010, the United Nations declared 15 October as “World Students Day” in recognition of the love for students towards Kalam, who was himself a dedicated teacher and taught what he taught earlier in his own life. Used to take Kalam has a very close relationship with the students. He always understood his words easily. Therefore, on his birth anniversary, ‘World Students Day’ is celebrated all over the world.

He began his career as a scientist, at the Aeronautical Development Establishment of the Defense Research and Development Organization (DRDO). In addition, he served as the Project Director of India’s first Satellite Launch Vehicle (SLV-III) at ISRO.

27/08/2020/9:19:pm
Lucknow: In Uttar Pradesh, after the encounter of Bhartiya Janata Party criminal Vikas Dubey, the resentment among the Brahmins and not giving much pressure...

12/06/2021/7:49:pm
Bhopal: The India Meteorological Department (IMD) has issued an orange alert on Saturday expressing the possibility of thunder, lightning, and heavy rain in six...

Tokyo Olympics: IOC Official Says Games Will Go Ahead Even Under State of Emergency