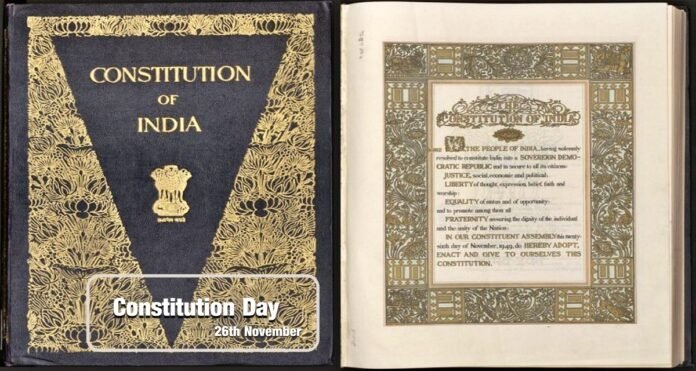 Today is law day
Today i.e. 26th November was celebrated as the first Law Day. And the story behind it is that in 1930 the Congress Lahore Conference passed the pledge of Purna Swaraj, in memory of this event, Law Day was celebrated. Now let’s also know the history of Constitution Day.

Constitution and its importance
The real purpose of Constitution Day was to pay tribute to Dr. Ambedkar, one of its creators and the country’s first law minister. The Constitution of India is actually an account of those principles and principles, on the basis of which the fundamental political principles, procedures, rights, guidelines, restrictions, and duties, etc. are fixed for the government and citizens of the country.

02/07/2020/12:12:am
New Delhi (ANI): Through a powerful campaign #DobaraPoocho, actor Deepika Padukone on Tuesday urged people to be a little more attentive towards their loved...

19/09/2020/12:31:am
LACHEN, Switzerland:  Octapharma is pleased to announce that the first site for the international PRO-SID (Primary Infection Prophylaxis with Panzyga® in Secondary Immunodeficiency in Chronic Lymphocytic...

Novak Djokovic to play for Serbia at Tokyo Olympics

16/07/2021/9:05:pm
Belgrade: Wimbledon champion Novak Djokovic says he will play for Serbia at the Tokyo Olympics, which could fulfill his dream of a Golden Slam....

07/12/2020/4:02:pm
New Delhi: Farmers are constantly protesting against the agricultural laws of the central government. Today is the 12th day of Kisan Andolan (Farmers Protest)....

09/08/2021/10:45:pm
Kabul: The Taliban have captured the capital of another province in Afghanistan on Monday. Rebel attacks continue amid the withdrawal of US and NATO...