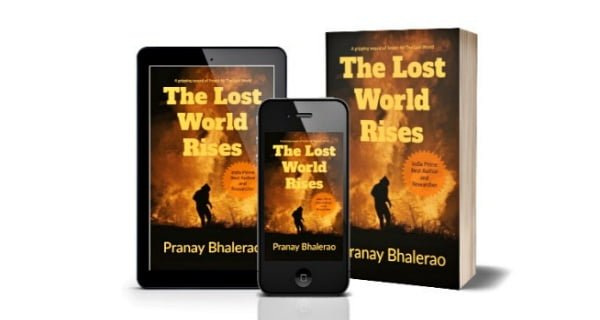 The Lost World duology is completed, its final installment is about to hit the markets in October 2021. The official release date is not been confirmed by the author but the target is the second week or third week. But we have the pre-release copy with us and it is the fitting conclusion to the first enthralling read The Lost World. The title of the second installment in The Lost World duology is The Lost World Rises. As the author claimed the world is expanded, and we have only one thing to add, this expansion is the best way to immerse into this world. Several new key characters are introduced. The author had made sure that his existing audience get a glimpse of this character in the first part. He has also added a bonus chapter from the Lost World Rises. The sequel is longer, deals with a lot of emotions, and of course the action. The pace of the story is fast, and towards the end, everything starts making sense. The author Pranay Bhalerao won the India Prime best Author and Researcher 2021 award for his work in the Lost World.

The story of The Lost World Rises starts from the point where its predecessor The Lost World had ended. All the questions readers have had from the first part have been answered in this book. The length of the book is solid. The internal battles of every character are shown beautifully. The author does not present you with 4, instead gives you 2+2. It’s again a page-turning story. You won’t be putting it down until you finish it. The improvement in the interior and overall storytelling is commendable. We may not be able to discuss the story at length, because we don’t want to give away the spoilers.

Grab your copies of The Lost World from the link below –

15/09/2020/5:02:pm
Dallas, United States:  The Purpose Power Index™, a study on how consumers really think and feel about brand purpose conducted by Reputation Institute and StrawberryFrog,...

Amitabh Bachchan NFT collection got bids worth Rs 3.8 crore on the first day

30/07/2020/11:27:pm
Chennai: The lockdown in Tamil Nadu has been extended till August 31st. In a statement in Chennai, Chief Minister Edappadi Palaniswamy said that full...

Former US President Donald Trump will now do commentary in boxing