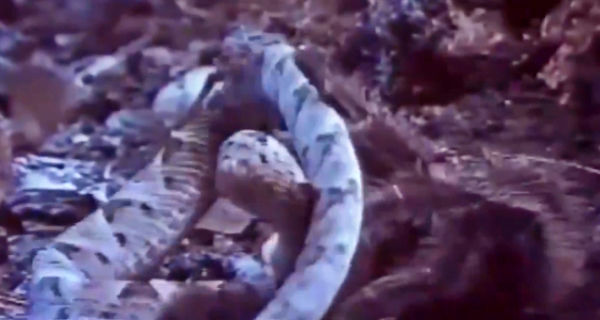 Everyone knows how dangerous and poisonous Snake is. In the blink of an eye it can kill humans and many animals. They know their hunting very well. There are many species of snakes too, of which the King Cobra Snake is a very dangerous and poisonous snake, but sometimes you get to see something that surprises you. A video offering a similar example is going viral, in which the cobra becomes the victim of a spider.

This video has gone viral on social media. In this video, the spider hunting venomous snake is becoming very viral. This little spider trapped the cobra in its trap and made it so helpless that it could not stand in front of it.

In this video viral on the social media platform, you can see that a snake is sitting among the bushes, then his gaze goes on the spider and he comes quickly to hunt him. As he approaches the spider, the spider strikes him, which makes the snake angry.

This video has been shared by Nazi Al Takhim on social media. In its caption, he writes that ‘the giant spider beat his death and ate the snake. Cobra hunt… King Cobra… ”This video was shared on 29 January. Everyone is stunned to see the little spider hunting the King Cobra in the video. At the same time, this video is also being liked a lot on social media.

‘The Girl on the Train’ to be released today, ‘I want to surprise people’: Parineeti Chopra

From Drishyam 2 to Dev DD, several web series will be released this week

07/11/2020
Berlin: The daily increase in cases of Corona Virus infection in Germany has raised the concern of the country's Center for Disease Control. The...

26/02/2021
New Delhi: After the terrorist attack on the CRPF Convoy in Pulwama, Prime Minister Narendra Modi of India called a meeting of the Security...

Russia’s Corona vaccine Sputnik-5 can be produced in India and China: Vladimir Putin

18/11/2020
Moscow: Russian President Vladimir Putin on Tuesday called on BRICS countries to work together to develop a vaccine for the coronavirus. He suggested that...

What measures did Maharashtra, Delhi, and Gujarat take to deal with Corona?: Supreme Court

23/11/2020
New Delhi: The number of people infected with Coronavirus (Covid-19 Cases in India) has crossed 91 lakh in India. Meanwhile, daily cases of corona...