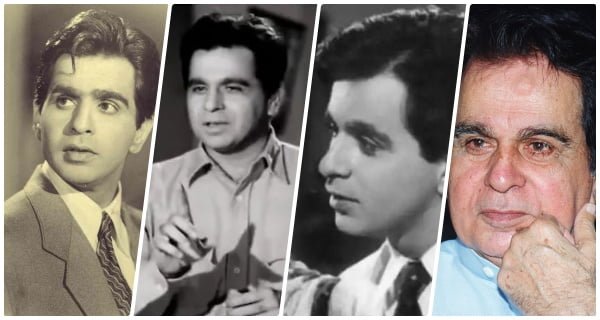 58 years to be precise — comprises unforgettable movies and moments that have forever lit the Indian silver screen. There has been only one Dilip Kumar. His smoldering intensity, a delivery filled with deep pauses, and his ability to inhabit the characters were a joy to watch.

1944-1960: Dilip Kumar’s first film, Jwar Bhata (1944) went largely unnoticed; three years later, Jugnu was his first major box- office hit. Several hits followed: Mela (1948), Andaz (1949), Deedar (1951). After PC Barua, he was the second actor to play the role of Devdas in the 1955 film, an adaptation of a Saratchandra Chattopadhyay novella. The Fifties anointed Kumar as the ‘Tragedy King’ of Bollywood (), the only superstar who excelled in this form at the time of Raj Kapoor and Dev Anand. The tragic roles, however, took their toll. At the suggestion of his psychiatrist, Kumar decided to do light-hearted roles. And he did just that with films like Aan (1952), Azaad (1955), and Kohinoor (1960).

1960-1970: In 1960, the historical film Mughal-e-Azam, where he played the role of Salim became a blockbuster, and up until 2008, it was the second highest-grossing film in history of Bollywood. In Ganga Jamuna (1961), his first and only production, for the first time Kumar and his brother Nasir Khan appeared together and played the title roles. Kumar, in fact, was also one of the few actors of that time to have been offered an international project: he was offered the role of Sherif Ali by British director David Lean for the film Lawrence of Arabia (1962). Kumar, however, declined rejected the offer. In 1967 with Ram Aur Shyam, Kumar for the first time played a double role. It was a major hit.

1970-1980: The ‘70s wasn’t a particularly good time for Kumar with several new and young actors entering the film industry. His career was at an all-time low. He tried his hand at experimenting with his roles in films such as Dastaan (1970) and Bairaag (1976), even playing a triple role, but neither film did well. From 1976 to 1981, he decided to take a hiatus from acting.

1990-2000: With Saudagar (1991), Kumar, alongside veteran actor Raj Kumar delivered a hit film at the box office. At that time, both actors were reportedly not on good terms with each other. Two years later, Kumar won his first Lifetime Achievement Award after having completed almost 50 years in the industry. In 1996, Kumar wanted to try his hand at direction with the film, Kalinga. Unfortunately, the film was shelved. Kumar made his last film appearance in the movie Qila (1998).

For long life, it is necessary to walk 5 thousand steps daily, risk of death will also be reduced by 40%

How businessman Richard Branson traveled from poverty to becoming a billionaire

Mantra sound and the psyche

What are antibodies? what happens when they are low?

Oxygen Concentrators: What We Need to Know

09/09/2020/10:38:am
Washington: America (US) has described Pakistan as better than India for the journey. The US has revised its travel advisory for Pakistan and keeping...

Mantra sound and the psyche

21/06/2021/11:01:am
Mantra chanting is said to help develop one’s mental powers and strength, ease stress, and take one to a higher level of consciousness. A...

14/03/2021/11:38:pm
British royal family preparing to hand over the investigation of allegations against Megan to an outside firmMegan was accused of harassing Buckingham Palace employees...