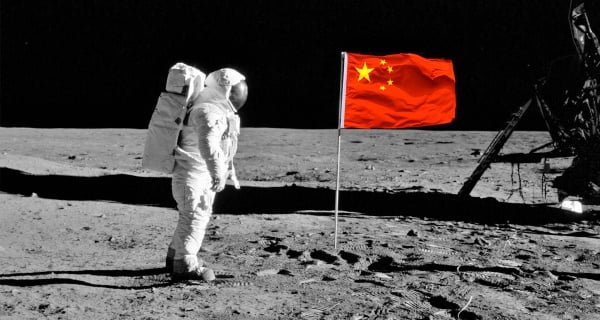 Flag Unfurling of China is reminiscent of the Cold War days when the USA was the first country to fly the flag to the moon in 1969. Prior to that time, Russia had overtaken the United States and Russia (USSR) in space research by sending the first spacecraft and the first astronaut into space. But in 1969, the U.S. took the lead by landing the first man on the moon. Neil Armstrong and Buzz Aldrin hoisted the U.S. flag on the moon, which was considered an indicator of U.S. dominance.

The USA, under its Apollo Mission, then landed 12 astronauts on the surface of the Moon in six flights. This series lasted from 1969 to 1972 in which 382 kg of stones and soil samples were brought to earth from the moon. Russia then succeeded in bringing soil from the moon to Earth with its Soviet Lunar 24 in 1976.

More than 50 years later, on Friday, China’s space agency (CSNA) succeeded in collecting soil samples on the moon, along with its Chang’e-5 spacecraft. The Chinese flag was also hoisted on the surface of the moon. Photographs of the flag hoisting were taken from the Changai-5 Lunar Vehicle. The spacecraft was launched on the 23rd of last month.

This Chinese vehicle managed to collect samples a day before its scheduled event. This is the third spacecraft to land on the Moon in this century. The vehicle has collected two kg samples. To launch the spacecraft to the moon, China has used the Long March Rocket, which is considered to be the most powerful rocket in the world to date. China is currently engaged in missions that could take it ahead of the United States in the space competition. It is believed that the purpose of waving the flag on the moon is also an attempt to attribute this success to China.

China’s ambition to become a super power in the world is not hidden from anyone. This is clearly visible in space matters. He intends to build his own International Space Station (ISS) in two-three years and has signed agreements with some countries for this. He will be the first country to send an orbiter, a rover and a lander in a single mission to Mars if he succeeds. It has become the first country to land a rover on the back of the moon.

It is true that China is not in a position to equal the USA at this time, but it is also true that it can overtake the US. At the moment this is not possible, but China is still competing in the same way as the US and Russia did during the Cold War. It should come as no surprise if some people look at the work of flag unfurling on the Chinese moon from the same point of view.

06/12/2020
Indore: The leaders of Madhya Pradesh are also following the path of Uttar Pradesh Chief Minister Yogi Adityanath. After discussions of changing the names...

09/07/2020
New Delhi: Civil Aviation Ministry today said, India and the UAE have allowed their airlines to carry people authorized to travel between the two...

30/08/2020
New Delhi: HONOR, the global leading tech brand for the youth, announced the second sale of its first-ever laptop for the Indian market...

30/09/2020
New Delhi: The Union Ministry of Home Affairs has released its 5 guidelines on Wednesday. In Unlock 5, the government has given permission to...