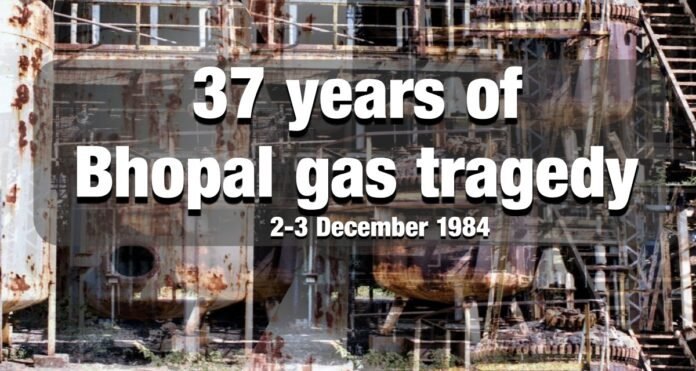 New Delhi: Indians have not forgotten the Bhopal Gas Tragedy 37th anniversary to date. It has been 37 years since this gas incident. This is the most painful tragedy recorded in the pages of history, which is still fresh in the minds of the people. This incident has destroyed thousands of lives overnight. On the night of 2-3 December 1984, such an incident took place in Bhopal, the capital of Madhya Pradesh, which shook the whole world including India.

It is to be known that when everyone was sleeping on the cold night of 2-3 December in Bhopal, suddenly the poisonous gas started leaking from the Union Carbide India Limited plant here. Soon this poisonous gas spread rapidly throughout the city. By the time people could understand, it was too late. Thousands of lives slept in the lap of death from this gas forever.

It may be noted that this entire accident happened due to a gas leak at the pesticide plant of Union Carbide India Limited. After this painful accident, Union Carbide Chief Managing Officer Warren Anderson left India overnight and fled to America. This traumatic event has ruined the entire breed. After the Bhopal gas tragedy, the exact figure of death has never been revealed, which is a bitter truth.

Many of the children who were born after the tragedy had disabilities
After this whole incident, people living in the nearby settlements started having suffocation, cough, burning in the eyes, flatulence, and even vomiting. Within no time there was a huge crowd of patients in the hospital. After the incident of this tragedy, many of the children who were born there were born with disabilities and many came to this world with some other disease. Even today many babies are being born with abnormalities in the affected areas.

On the other hand, on 7 June 2010, the local court also ruled on this incident. But the accused were sentenced to only two years imprisonment by the court. Later all the accused were released on bail. Whereas the then Chief of Union Carbide India Limited and the main accused in this tragedy, Warren Anderson also died on 29 September 2014.

14/07/2020/9:57:am
Mumbai: In the midst of the political turmoil in Rajasthan, Nationalist Congress Party chief Sharad Pawar has met Chief Minister Uddhav Thackeray. According to...